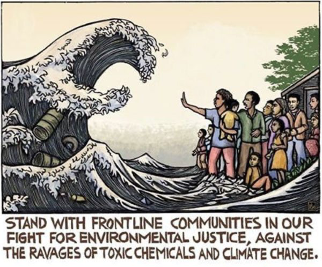 Your postal code determines your health. This was a key takeaway from Dr. Ingrid Waldron’s lecture Mapping Racial Geographies of Violence on the Colonial Landscape, which she presented at Windsor Law in early February. In unpacking the hierarchies and intersections of race, culture, gender, income class, and other social identities that are spatialized, Dr. Waldron argued that the lived experience of spatial violence and toxic exposure live together, and that is not possible to understand their impact for Black and Indigenous communities in isolation. This argument was exemplified by understanding and identifying environmental racism, which she defined as “the disproportionate location or siting of polluting industries in communities of colour, Indigenous communities, Black communities, and the working poor”.  And it is these communities that historically have the least economic and political base to fight back. As Aisha Poiteven wrote in a previous Windsor Law Cities and Climate Action (CCAF) guest blog on climate and racial justice, a report by Stats Canada in 2017 showed that new immigrants in Canada tend to breathe more polluted air compared to white Canadians.

This makes it unsurprising that much of the mainstream climate and environmental movement has centered whiteness. For Dr. Waldron, there has been progress in organizing around climate change, but not enough around environmental racism, and how environmental and climate issues uniquely impact Black and Indigenous communities. She states that conversations around sustainability, for example, do not address the root problems of colonialism and capitalism that both cause and exacerbate environmental issues.

In Windsor, most are very familiar with issues of air pollution and impacts to health across the city. Jane McArthur, a doctoral candidate in sociology at the University of Windsor, recently published research findings that showed women working at the Ambassador Bridge and the Detroit-Windsor Tunnel are at a 16-times greater risk for breast cancer than the general population largely due to the high levels of air pollution. These findings also leave questions about the environmental health impact of the bridge on neighbourhoods like West Windsor. West Windsor is situated next to the bridge, and is one of the most racially diverse neighbourhoods in the city, with many newcomers and lower income households.

So how can Windsor begin to address environmental racism?

One recommendation of Dr. Waldron’s is to look at what has already been done, and by whom. Not only having a multiracial and intersectional movement that centres Indigenous knowledge and practices, but also uplifting and supporting diverse groups in the community who have already begun working towards that change. One example is Green Ummah, a non-profit environmental organization looking to expand the green movement in the Canadian Muslim community (co-founded by Windsor Law graduate and CCAF alum Aadil Nathani!).  More recently, the Black Council of Windsor-Essex, a community-based collective of African, Black, and Caribbean individuals formed in August 2020, have recently become members of the new national Anti-Environmental Racism Coalition. Supporting and elevating the work of these groups is a place to start.

Meet Folks Where They’re At

Connecting environmental issues to different communities sometimes means using accessible language and education. Dr. Waldron does urge for the continued capacity-building among youth and other community builders, through an anti-racist and intersectional lens.

Beyond this, Black and Indigenous folks certainly understand and feel the scientific effects of polluting industries and the rise of greenhouse gas emissions on their communities. However, with these communities experiencing several inequities that are even more immediate, how they address environmental racism may look different. Issues such as affordable housing, proximity to health services, and food deserts are urgent spatial inequalities Black and Indigenous communities face that connect with environmental racism and public health.  Cities need to look at these from an anti-racist and intersectional perspective.

Transit is another intersecting environmental issue that often can have disproportionate impacts on BIPOC communities. Transit is a key plank of many cities’ climate action plans.  However, much of the transit ridership in Windsor is racialized and low-income, making transit provision both an environmental and an equity issue. Yet the proposed 2021 City of Windsor budget sees the removal of funding for a proposed transit route that would have seen commutes for east-end students to St. Clair College cut from two hours to thirty minutes. Additionally, there is a proposed fare increase for transit riders that would disproportionately effect marginalized groups, who during COVID use transit as an essential service. Most who use transit are unlikely to be the ones that would benefit from the proposed zero percent property tax increase in this year’s budget (since this tax freeze only benefits property owners) but transit riders would be the ones to have to shoulder extra costs.

Budget constraints in light of COVID have naturally been a central issue for municipalities everywhere. However, with increases to other budget items like funding of the police, after a year where many are advocating for reallocation of financial resources to other community services, and a proposed adoption of an economic development strategy that speaks little to active transportation and socio-economic issues, perhaps an environmental racism lens in preparing the budget would have produced different results.

Overall, organizing not only around the climate crisis, but environmental racism, is specifically needed to achieve actual environmental justice.

Princess Doe is a second year JD student at Windsor Law and a Student Research Associate for the Centre for Cities.

Opinions expressed in blog posts are those of the author and do not reflect an official position of the Windsor Law Centre for Cities.